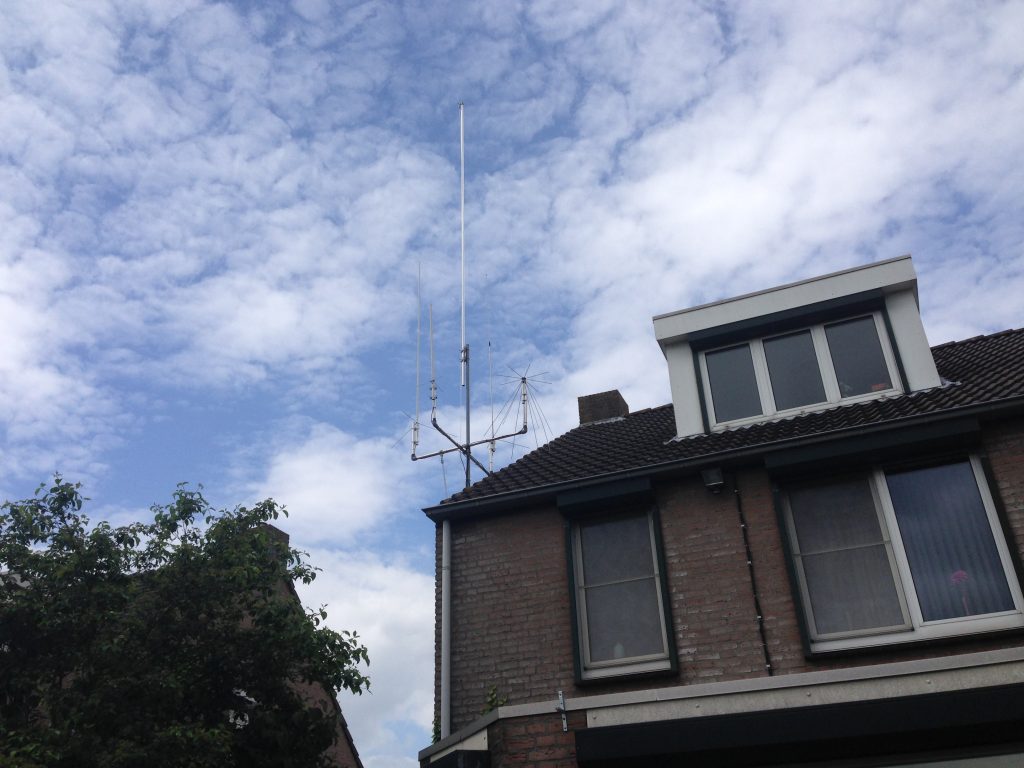 In June 2016 the antenna setup has been changed a bit. The Hygain AV-620 had such a damage that it has been dismantled and scrapped. Because of the location of the house, the wind speed and the fact that 2 HF verticals had surrendered within 3 years I’ve decided to go back were I came from. Back to the wire antenna. When I was a young boy living with my parents I had the luxury situation to use a full size 40m wire antenna. At my own home I don’t have that space, so I need to go up into the air. The Hygain has been replaced by a solid aluminium tube. On top of this 5m long tube I’ve mounted a pully with a nylon line, which enables me to hoist up wire antennas as much as I like. This brings me at least 12m above street level. Easier, cheaper and more storm resistant than a vertical. On the other hand I need to pay more attention to grounding and counterpoise to avoid interference.

Also another 2/70 dualband has been added: the Diamond X-300N. This antenna is currently used with the Motorola MTM800 (Tetra radio).

The Comet 2m monoband is only used for local traffic. It’s connected to a Motorola GM300 with a tweaked codeplug. Now the radio has 40 channels instead of the regular 16. The list of programmed channels contains for instance PI3ZLB, ON0LB, ON0DST and DB0WA. Beside the repeaters it of course also contains some simplex QRG. Practically spoken this transceiver is mainly used for ON0LB and incidentally PI3ZLB.

Next to the Comet I have a small Diamond X-30. This antenna has been ‘abused’ already for different experiments. I’ve used the dualband antenna when testing with DStar and DMR and incidentally as backup antenna for a 2m transceiver. But currently it’s permanently connected to a Friendcom FC-301/D data transceiver for POCSAG paging.

Last but not least the mast carries a no name discone antenna. An artifact of the old times when listening to emergency services with scanners was really popular. The antenna was stowed away on the attic for years, but has been put back on the mast again. Now to listen into the airband with a classic receiver: the Signal Communications Corp. R-535.