Just like for instance DMR Tetra uses different parameters to determine the hierarchy in the network. Of course these parameters have to be programmed in each radio to make sure connections are setup correctly. These parameters are:

The entire address of a radio is a combination of MCC + MNC + GSSI + ISSI. This is not only important for network dependant connections (TMO). Also for DMO connections it’s good to think about the address parameters. The address gets really important in DMO when setting up private calls or sending text messages (SDS) to another radio.

It’s also possible to determine via the software which address range is the radio’s ‘home zone’. When configuring this correctly, only (a part of) the ISSI is enough to initiate a private call or to send an SDS. How this can be done is not part of this article.

In the past dutch radio amateurs already thought about these parameters. The MCC will stick to the coding as it’s in use for cell phone networks. Which means dutch stations use MCC ‘204’, similar to the amateur radio DMR network.

In PA the network code ‘MNC’ has been set to ‘7373’. Of course this sounds friendly to a radio amateur and I don’t see any reason to go a different way. Similar to this it has been decided to use ‘1000’ as GSSI. And because I don’t see any good reason to decide differntly I also stick to this GSSI. But be aware that in other countries where radio amateurs use Tetra (for instance in Germany) other standards are being used!

Then it was time to use the whiteboard in the shack to scribble a first setup of ISSIs. Beside the fact I don’t expect a huge hype of hundreds of amateurs switching to Tetra, I still wanted to keep a certain logic setup. So I’ve used the four numeric digits of the dutch postal code to form the first digits of the ISSI. This is followed by a three digit ‘suffix’, using the range ‘000’ until ‘500’ for mobile and stationary stations while ‘501’ until ‘999’ are reserved for portables. And because I don’t expect 1000 radio amateurs with Tetra equipment within the same postal code range, I’ve decided to give every radio its own ISSI. Nevertheless it could also be possible to use only one ISSI per call or per station.

The picture below shows the result of my thoughts: 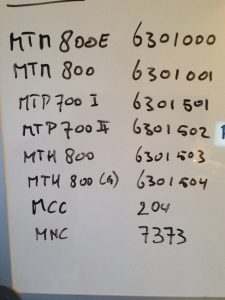