Somewhere in the nineties I wanted to get a new scanner. Especially because I wanted to listen to military air traffic. The NATO airbase in Geilenkirchen was not that far away and AWACS was flying circuits over my town day after day. Amateur radio magazines showed beautiful equipment, but bottom line was that only two scanners had my attention: the AOR AR-8000 and the ICOM IC-R10. When it came to the frequency range, the AOR stopped at 1900 MHz and left the Icom behind which stopped at ‘only’ 1300 MHz. But that wouldn’t be a showstopper because my area of interest was somewhere below 500 MHz.

On closer examination the AOR proved to be twice as expensive as the Icom, so it was obviously what brought me to the final decision. In those times there were no websites with huge amounts of reviews (or I still didn’t know them). So this scanner was purchases somewhat as a shot in the dark. Otherwise I would have noticed the IC-R10 is quite deaf. On the other hand the scanner can’t handle strong signals very well. A base antenna leads to a lot of interference making it almost impossible to listen to this scanner. 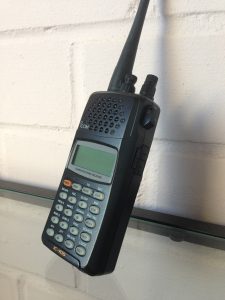 Nevertheless I’ve had a lot of fun with this scanner. The 1000 channels were ordered into geographical and user categories. Also this scanner had a nice function which made it possible to observe a predefined frequency range, storing all frequencies where some kind of a signal had been received. Furthermore the IC-R10 could be linked to an Optoelectronics ‘Scout’ to directly listen into nearby signals.

the Icom IC-R10 shown at the picture is the original one I’ve used (and carefully preserved). Especially because I’ve got this one as a gift.