My mobile shack is only appropriate for 2m usage. And even that wasn’t really easy. In modern cars it’s often not that easy to discover a free spot to mount a transceiver. So it took a while before I came to a solution. Mounting a regular HAM radio transceiver wasn’t an option because there was simply no proper spot available. So the next best option would be a transceiver with a separated front. A Yaesu FT-7800 was already waiting, but on closer look this wasn’t a solution either. It was simply not possible to mount the radio front on the dashboard without drilling holes.

Back to the drawing board. But the final solution was already waiting for years in my storage room! My mobile activities are limited to the 2m band. And for that purpose I had a Motorola GM950 with the so called HHCM (‘Hand Held Control Microphone’) at the shelf. I would like to have the base part of the radio mounted under the passenger seat. To have this done I went to my car dealer as the seat had to be taken out of the car to mount the radio. And I was afraid to mess up the wiring / electronics of my car when connecting the power cable of the transceiver. So I went to my dealer, where everything was wired properly to the fuse box.

For the HHCM I’ve found a bracket designed for my car, which I’ve mounted to the center console. Also without drilling and sawing.

The antenna is a Diamond AZ-506 on a trunk mount. Along the rubbers of the trunk the cable is guided into the car, going under the back seat towards the transceiver under the passenger seat. 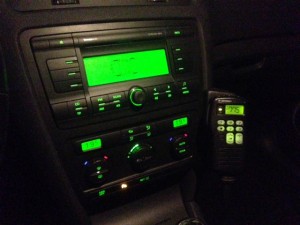 I’m also mobile QRV with Tetra. Currently I’m still using a Motorola MTP700 portable with a 70cm Procom magmount antenna. To make it easy I’m also using a Motorola RSM (‘Remote Speaker Microphone’), because it’s not really handy and save to keep the radio in my hand while driving. The MTP700 has been programmed with some HAM frequencies, all having the parameters like shown below:

As this radio originates from from the time when PA took the very first steps on the Tetra path, many nice functions can’t be used in DMO mode. Which basically means this radio can only be used for simplex QSO, with or without the Echolink node.