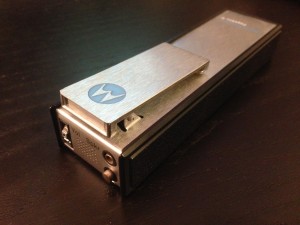 The all time great Motorola Pageboy 2 will remain in the memory of many employees of the (dutch) emergency services. Introduced somewhere at the end of the seventies this pager often remained in service for two decades. The pager was available in the 4m, 2m and 70cm band. In Europe activation of the pager was done by 5-tone sequences according to the ZVEI-standard. Mostly the tone sequences were sent on the same frequency used for voice communication, but in some regions / countries a separate alerting frequency was used.

Usually one or more tone sequences were sent two times in a row, often via different transmitter sites. To avoid interference the sites were transmitting after eachother. After the last tone sequence had been sent, the dispatcher verbally gave a brief description of the emergency.

Having the pagers on the regular voice communication channel was seen as an advantage because this gave people off duty the opportunity to listen in and eventually take action. But most of the times this was just being nosy about what colleagues were doing. On the flip side it could happen in case of a bigger emergency that many different people or groups had to be paged. Taking into account that all sequences were repeated and also transmitted via different sites, this could take some time. This was really annoying when you had to wait until everything had been sent, before you could grab the microphone for some urgent contact with the dispatcher!