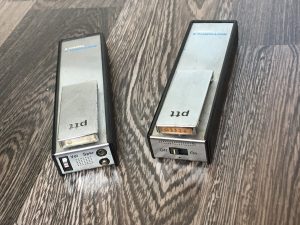 A newcomer in the pager collection is the tone only version of the Motorola PageBoy II. The PageBoy II as shown at the left side of the picture is widely known as it was the workhorse of the Dutch emergency services for decades.  On its left side the pager had a little ‘wheel’ which embodied three functions. First of all you could hear and feel a click when turning the wheel and switching on the device. When turning further this little wheel was the volume control. Although the alert tone was always the same, the volume of the spoken message could be adjusted. But on the far end of the range this volume control had another ‘click’ to bypass the tone sequence. This made it possible to monitor the frequency of the pager (as this often also was the operational radio channel).

The middle part of the upper side of the pager was taken by a little speaker and at the right side there was a jack connector for an earphone and a pushbutton to open the squelch and/or reset the tone squelch.

So far about the well known descent of the PageBoy family. Less known is the tone only version of the PageBoy II. As its name already describes this pager was only able to beep after being activated. So it was not possible to listen to any audio message or monitor the radio channel. The pager was activated in the same way as the PageBoy II described above: the frequency was determined by a crystal and an exchangable ‘codeplug’ was used to set the 5-tone to activate the pager.

At the right side on the picture above the tone only PageBoy can be seen. It can be recognized by the slider switch at the top. By this the pager was switched on and by pushing it the alert tone was reset. Still unknow is the use of the middle position of the switch.

Nice to know is the fact that both pagers, despite their age, are still fully functional. The left PageBoy has been tuned to a VHF amateur frequency. The tone only PageBoy is still listening to an old Dutch VHF frequency, formerly used by the firebrigade.