Under the name ‘Motorola Saber’ Motorola had produced a series of high end portables which was rebranded as ‘MX’ model in Europe. But there has been another rebranding after Big M had acquired Storno. This series was also sold under the Storno brand as CQP7000. 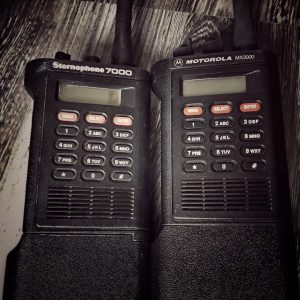 The serie consisted of three different types, each available for the 4m band, 2m band or 70cm band:

All these radios work flawlessly in the different amateur bands. Using the correct software the radios can be programmed out of the specified bands without any issues. The critical part is the age of the software, which makes it only usable with an MS-DOS PC. This PC shouldn’t be faster than a 80386 with a clock speed of +/- 25 MHz. Using a faster computer will cause communication issues between radio and PC. Emulation of a slow PC using the application ‘DosBox’ hasn’t been successful yet.

Furthermore a RIB box and the correct programming cable are needed. Currently both are easy to get via the internet.