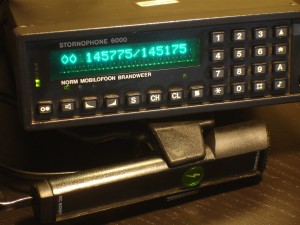 These beautiful radios were suplied to fire brigades by the dutch ‘Ministry of the Interior and Kingdom Relations’. But as the emergency services had switched to Tetra, the radios appeared now and then on the second hand market. But there was no big enthusiasm among radio amateurs. The radio had some exotic firmware, original programmers were hard to find and too complex to build, and it was almost impossible to find the correct programming software. Most of the companies which had supplied the emergency services before the switch to Tetra, had moved all the analog gear to the bin.

But suddenly somebody had figured out some firmware and created a codeplug to use the Stornophone 6000 in the 2m band on some predefined channels. At least a start, but far from ideal and radio amateurs ran in to its limits very soon. Except the use of some fix frequencies nothing else was possible: no VFO, no CTCSS, etc. Although the radio has a full keypad…

After some research I’ve found some revolutionary firmware on the internet: the ‘Victor / Straycat firmware’. This firmware turns the Storno into a complete 2m FM amateur radio transceiver by offering operation through the keyboard. Frequencies can be entered, CTCSS and (for the specialist) sending of ZVEI tones is possible. The firmware offers that much of functionality that even space on the keyboard got tight. Therefore the software manual is absolutely to be advised. 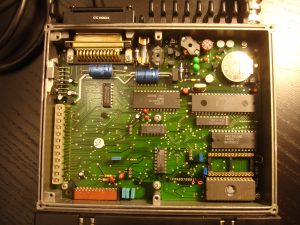 The picture at the right side shows the Storno after the new EPROM as been inserted. Therefore the upper cover of the transceiver has to be removed. Then you can see 2 EPROMs in the lower left corner. The one closest to the front of the radio contains the firmware, the other one is programmed with the ‘personality’. The ‘personality’ contains the actual programming, the ‘firmware’ EPROM contains the ‘operating system’ for the radio.

Always remove the sub-D connector from the radio’s rear before opening its case!

Both original EPROM have to be removed. Then the EPROM with the new firmware has to be inserted in the ‘firmware’ socket (pin 1 at the left side). The socket of the ‘personality’ remains empty. At this point the ‘modification’ has been completed. After putting the case together the set can be fired up again.

It takes some time to get used to the functionality of the set. You can download a brief manual.

Please also pay attention to the jumper settings at the left side of the PROMs!

Or download the BIN file for the 2m Stornophone CQM6000 here