Currently little is known about the Swissphone Sherpa. Anyway this is a 5-tone pager which was in the product range of the former dutch telecom. The pager was used in case the owner was called on the radio but not in the vehicle. Therefore the pager had to be taken while leaving the car. If the subscriber was called but not answering, the personal 5-tone could be sent, which triggered the radio in the car to resend it as a kind of a repeater to activate the pager.

It’s obvious this particular Sherpa was used in this construction, as it came with a cradle / charger for a car. Within the cradle the 3.6V internal battery of the pager could be charged using the 12V net of the vehicle. This battery is by the way a spitting image of a regular 1.2V AA battery.

Furthermore this Sherpa is a 2m version, but I’m still unaware of the exact QRG. Therefore the pager has to been carefully taken apart. 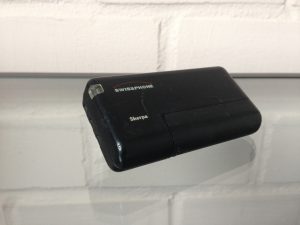