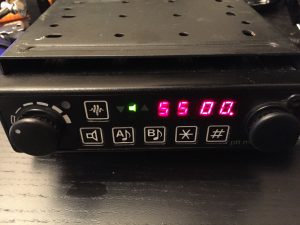 The former national telecommunications company of the Netherlands has sold this unit rebranded as ‘Condor 16’. And by that name the radio became well known in the Netherlands. The UHF variant, Teletron TMC-87, was also availabe as ‘Condor 46’. For a long time the Condor 16, but also the Condor 46, where available in almost every HAM shack. But interest decreased as more and more repeaters started using CTCSS. And most of the radios didn’t have the necessary hardware to generate subtones. In early days the FX315 tone encoder was still available, but way too expensive. This encoder, together with a 4094 shift register and some other componentens could be used to build the encoder into the designated spot in the radio. But currently these chips are hard to find, and there’s no ‘real’ substitute. Nowadays some modification kits with a PIC are available, but this mostly enables a single fix subtone. Especially close to the border this doesn’t come in handy.

There were drie different versions of the Condor 16 available on the market. They could be distinguished by a colored dot at the cooling fin next to the BNC connector. A blue, yellow or red dot indicated the (optimal) frequency range of the radio. For radio amateurs the blue dotted Condor was most ideal as it was the easiest to modify for the 2m amateur band.

I’ve also had a Condor 16 in my storage. And I even did the modification with the FX315 tone encoder. But as the radio had been unused for many years, it finally changed management…

But suddenly, together with a ‘box of junk’, a Condor 16 landed on my table. The radio looked like it had spent many years in a dusty storage room: it looked horrible! But after some good cleaning quite a nice radio had been hiding under a thick layer of dirt. After cleaning the bracket as well I could finally fire the radio up. As a surprise the radio had been modified already and VFOza97 firmware was already in the EPROM.

Knowing this I wanted to personalise the radio a bit more: my own frequency on boot, my own 5-tone and my own call for the CW beacon. In my junkbox I even found a single 2732 EPROM (which are also quite hard to find for a reasonable price). While the EPROM was still in the UV eraser, I’ve knitted my personalised BIN-file using the application ‘Condor16-46.exe’.

To write EPROM etc. I use a ‘Willem Programmer’, which can be purchased from the internet for a nice price. It’s not a programmer for high volume production as this is a PCB on four rubber feet and without a nice enclosure. But the latter comes in handy as the many jumpers on the programmer are easy to adjust. And this is necessary to burn a 2732. After selecting the correct chip a picture in the software shows the correct settings for the dipswitch. But the settings of the jumpers JP1, JP2 and the VPP jumper are easily overlooked. And it’s even nowhere flagged to change the programming voltage, as the 2732 wants to be programmed with 25V. To get this voltage two other jumpers at the right side of the PCB needs to be changed.

But with the correct setup of the programmer it’s a walk in the park to zap the firmware in the EPROM. After having it inserted in the Condor I still needed to find the manual for the software. To provide a shortcut to others, everything needed can be found here.

Get the manual of the Willem Programmer